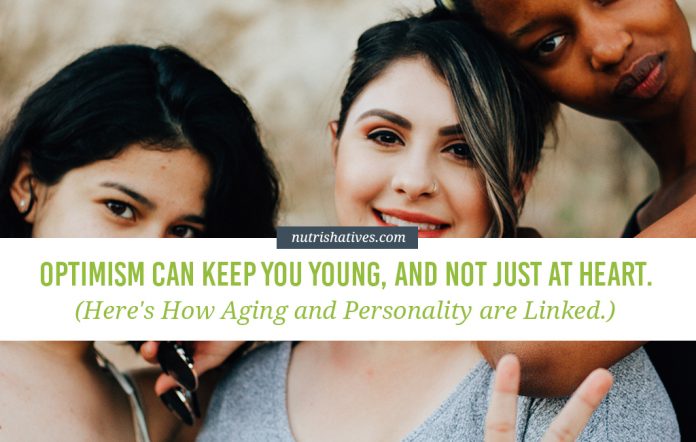 Aging and personality?  Is there really a connection?

It might be hard to believe, but new research suggests there may be tight connections between your quirky character and how well you will age.

And it all comes down to a theory called “the Big Five Traits of personality”.

What Are the Big Five Traits?

The big five trait theory is a popular model for classifying personalities.

It works with the idea that, when you look at broad, overarching behaviors and beliefs, people’s personalities are almost always dominated by one (or, rarely, two) of just five character traits (Figure 1).

These five traits are:

Let’s check out what behaviors and beliefs define each of these categories! 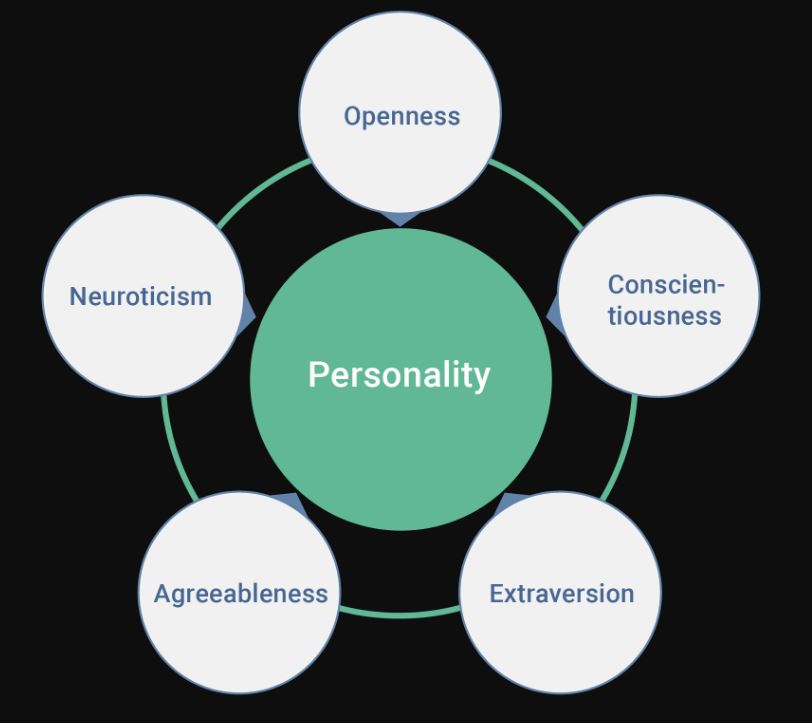 Individuals with Openness to Experience-dominated personalities are imaginative, insightful, adventurous, and creative.  They have a broad range of interests, are open to trying new things and excel at thinking abstractly.

People with Conscientiousness-dominated personalities are extremely intellectually driven. They are capable of managing their impulses and have very goal-directed behaviors.  They are usually extremely organized and mindful of small details.

Individuals who have an Extroversion-dominated personality are extremely excitable, very sociable, talkative, assertive, expressive, and open with their emotions.  They truly wear their hearts on their sleeves!  These individuals are outgoing and almost ‘gain energy’ in social situations.

People with Agreeableness-dominated personalities have attributes that revolve around trust, empathy, altruism, kindness, and affection.  They are typically quite cooperative and shy away from unnecessary competition or confrontation.

Individuals with Neuroticism-dominated personalities are frequently sad, have unexplained moodiness, and are emotional instable.  They are frequently extremely stressed, which triggers anxiety, irritability, and sadness.

Note: for those of you interested in reading into the five personality traits in more detail, I strongly recommend you check out this review article or this popular book.

What Determines Your Personality Trait?

So, where does your dominant big five character trait come from?

That is a question that is currently up for serious debate, with many experts in the field having wildly different opinions.

Generally, though, most experts agree that, whichever factors end up being most important, both your genes and the environment you grew up in are likely involved.  Nature and nurture almost certainly worked together to create your personality.

Interestingly, research has also shown that your big five personality trait can change with life experiences and maturation.  This indicates that the decisions you make and the things you learn can influence your personality, potentially over your entire lifespan!

So you’re probably thinking, “That’s a nifty list of character traits and how I might have developed them, but how could any of this affect my health?”

Hang with me a minute more!  We’re almost there!

See, research has shown that which big five trait dominates your personality has a huge impact on how you deal with emotions, and think about your body and your health.  This, in turn, changes if, how, why and when you engage in health-related behaviors.

And changing your health-related behaviors absolutely changes your risk for chronic diseases and diseases of aging!

Read Next: Tools for Life-Long Wellness: Understanding How and Why You Age

Here are the relationships each of the big five traits have with health-related behaviors.

If your personality is rich in the Agreeableness trait, you are likely to be optimistic and self-compassionate.

Engaging in plenty of health-positive behaviors lowers your risk of developing chronic diseases and diseases of aging, such as diabetes, high blood pressure, mental illness and stroke!

If you have Conscientiousness-rich personality, you are also most likely a generally optimistic and self-compassionate person.

You’re also likely very goal-oriented and good at managing your impulses!  This means you are very likely to stick to long-term goals and plans, such as diets or exercise regimes.

Just as with Agreeableness-dominated personalities, Conscientious personalities find it relatively easy to engage in positive, health-promoting behaviors.  This, again, helps protect you from serious, chronic diseases and signs of aging as you get older.

Additionally, you may also have an extremely hard time dealing with life’s stressors.  This means that you’re more likely to turn to unhealthy coping behaviors, such as smoking or drinking, when your life just won’t stop throwing you curveballs.

Just as healthy behaviors protect those with Conscientious and Agreeable personalities, negative health behaviors associated with Necrotic personality traits increases the risk that you will develop chronic diseases and diseases of aging, such as high blood pressure, obesity, and metabolic syndrome. 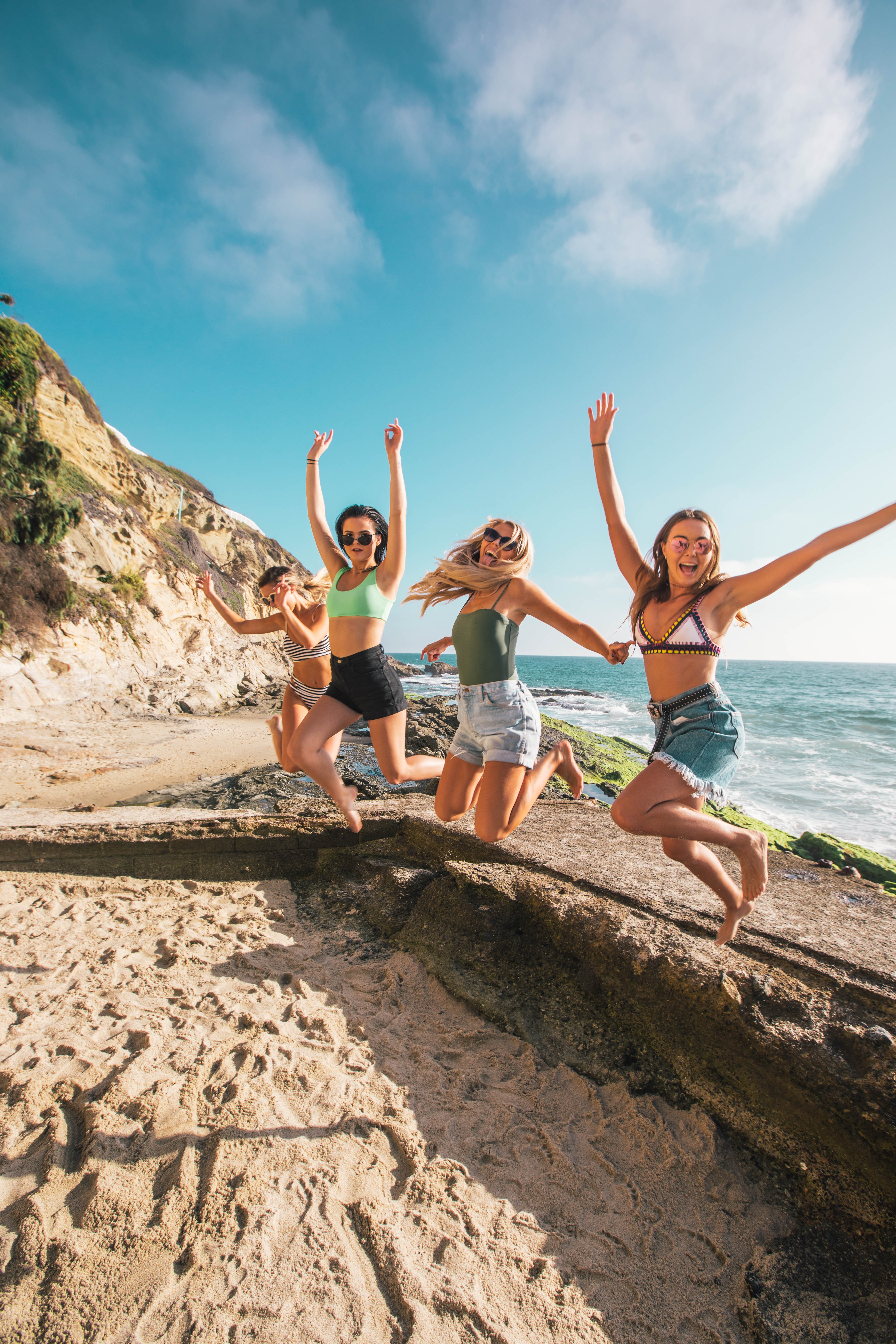 While the links between Conscientiousness, Agreeableness, Neuroticism are strong, the connections between health and Extraversion is a little murkier.

Researchers do know, however, that, due to your highly optimistic nature, if you identify with the Extraversion trait you are much less likely to deal with stress in negative ways.

While perhaps not as strong an effect as actively engaging in healthy behaviors, avoiding negative, stress-driven behaviors is still a boon for your health! It can impact general health and well-being quite positively, reducing your risk of developing a wide range of diseases.

Openness to Experience and Health-Related Behaviors

Of all the traits, Openness to Experience appears to have the weakest link to health and longevity.

Studies do show a small protective effect against early death if your personality is rich in Openness to Experience.  Researchers aren’t exactly sure how the two interact, though.

Your dominant personality trait influences your attitude towards life and yourself.

Optimistic and self-compassionate character traits (found in Agreeableness- and Conscientiousness and Extraversion-dominated personalities) make it more likely you will engage in healthy, self-protective behaviors.  This can protect you from chronic diseases and signs of aging.

On the other hand, negative self-views and worldviews (found in Neuroticism-dominated personalities) make it less likely that you will engage in healthy behaviors, and more likely that you will actively pursue unhealthy ones.  This can open you up to disease and aging down the road!

Though your personality influences the likelihood of participating in life-shortening (or life-prolonging) behaviors, it doesn’t dictate your decisions completely.  You still have the ability to educate yourself around aging, learn which lifestyle factors affect aging positively, and adjust accordingly.

Want to stay up-to-date with the latest in aging science?

Make sure to SUBSCRIBE so we can keep you in the loop! 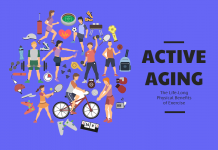 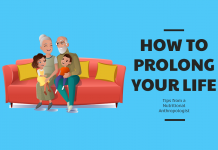 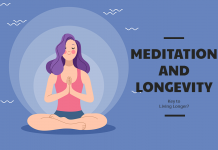 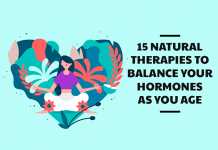 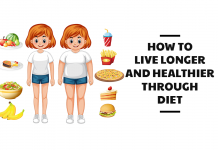 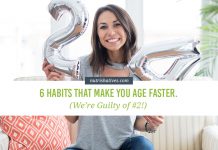