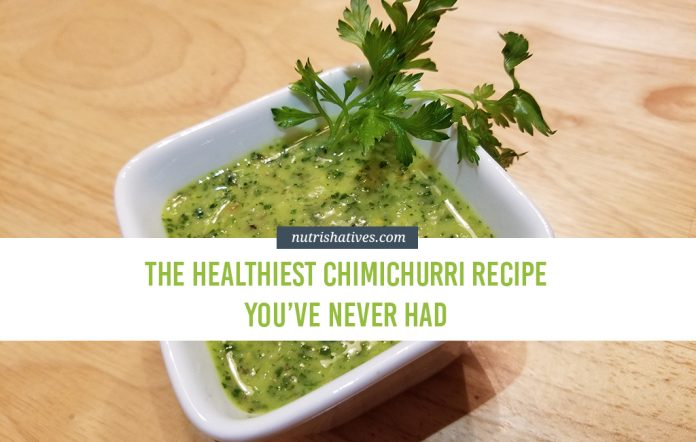 On the hunt for the healthiest chimichurri recipe on the planet?

That’s no easy title to claim since this simple traditional Argentinian condiment is naturally rich in healthy, spicy ingredients, but we think we’ve nailed it down!

Chimichurri: By Any Other Name

Food historians think the original chimichurri sauce, a simple mix of chopped parsley, garlic, oregano, vinegar, and olive oil, was invented by Argentinian gauchos as a way to flavor their campfire-cooked meat dishes.

How this succulent dish got its crazy-cool, roll-off-your-tongue name, though, is a total mystery.

One popular story is the name comes from the Basque, who called the gauchos’ sauce “tximitxurri” or “a mixture of everything”.

Other Argentinians have heard the name stems from the clash of English and Argentinian language and culture in the early 19th century.

One story claims, for example, that the name comes from a mashup of the phrase “Jimmy’s curry.”

Jimmy, either an Irish or English meat merchant or Argentinian freedom fighter in the Argentine War of Independence (depending on the rumor), lent his name to the sauce.  Since his name was difficult for the Argentinians to pronounce, however, the sauce’s title became shortened and pronounced “chimichurri”.

Yet another rumor, one that we happen to be particularly fond of, speculates that the name comes from English soldiers or prisoners of war (again, depending on who you ask).

The story goes that the English continually asked for the sauce with the Spanglish request, “Che mi curry”, rather than the correct “Che mi salsa.”  Add a little bit of time and, voila!  The name chimichurri sticks!

Fun to Say, More Fun (and Healthy) to Eat

Wherever the name came from, there is no denying that chimichurri is healthy, tasty and versatile!  It makes an excellent, simple, healthy dip for just about any savory snack, or an awesome sauce for chargrilled steak – you really cannot go wrong with chimichurri.

Switch it out for any of your less healthy condiments (like ketchup or ranch dressing, for example) and let your taste buds and your health thank you!

And with our slight twist on the traditional chimichurri recipe, adding a handful of extra health-promoting and flavor-boosting spices, you can pretty much expect a thank you note from your body in the mail!

There are 12 key ingredients within our chimichurri, 10 of which offer some serious health benefits to go with their amazing flavors.  These ingredients are:

Garlic is one of West’s favorite ingredients – and man has it earned its spot!

Not only does it offer a delicious flavor and aroma to your chimichurri, it is also highly nutritious.  Garlic provides the body with a potent serving of manganese, vitamin C, vitamin B6, and selenium.

Additionally, some of the key compounds found in garlic have been shown to enhance immune system function and also help reduce blood pressure!

Talk about a superfood!

Ginger is a unique spice that has had a place in traditional eastern cuisine for centuries.

Its delicious aroma is one of the most memorable smells on this planet, and it has a flavor to match.

Gingerol acts as an antioxidant within the body and has been shown cause significant reductions in whole body inflammation.  As a result, it can cause huge improvements in general health and function and help lower blood cholesterol levels.

Onions are one of the most commonly used ingredients on the planet.

Holding a place in both traditional eastern and western cuisine, this amazing root is renowned for its ability to enhance the flavor of any dish.

In addition to their amazing flavor, onions also contain a number of health-boosting sulphates and antioxidant compounds.  As a result, onions have been shown to lower blood cholesterol, reduce blood pressure, and even fight inflammation.

Cilantro (also known as coriander) is one of the most versatile herbs in the world.  It is a common ingredient in curries, salsas, and guacamole, among a host of other dishes and seasonings.

Cilantro is full to the brim with key vitamins and minerals, including vitamin A, vitamin K, folate, and potassium.

It also contains a unique flavanol with potent antioxidant properties known as quercetin.  Quercetin can reduce the negative impacts on health caused by nasty free radicals within the body.

Speaking of amazing herbs, it’s hard to look past parsley.  Full to the brim with vitamin K, vitamin C, vitamin A, folate, and iron, this amazing herb is more than just a tasty addition to your favorite dish.

Combine these healthy vitamins and minerals with parsley’s potent flavonoids, and you have a seriously powerful health-boosting herb that can help reduce inflammation throughout your body.

As a result, parsley not only gives chimichurri its easily recognizable color but also provides some of its most potent health benefits.

Turmeric is an amazing spice that is responsible for giving most eastern curries their bright yellow coloring.

Fascinatingly, turmeric has also had a reputation in India for thousands of years as a medicinal herb.

And research is starting to show that these ancient humans were onto something.

Curcumin is the primary active compound within turmeric, and it is an extremely powerful anti-inflammatory and antioxidant molecule.  Via curcumin, turmeric can enhance heart health and even help prevent age-related declines in cognition.

Apple cider vinegar is a common cooking ingredient that has recently become incredibly popular in the health industry.

While this is ultimately due to its growing reputation as a health food, I would also like to add that the fact it tastes amazing could (maayybbee) be partly responsible!

Apple cider vinegar is full to the brim with healthy microorganisms that have been shown to lower blood sugar levels and help manage diabetes symptoms.  Additionally, this amazing and refreshingly tart ingredient gives our chimichurri a unique flavor that many other chimichurri recipes are lacking!

Lemon juice is an integral part of our amazing recipe.

It provides a little citrus kick that matches so well with the cilantro and parsley.  In fact, I would argue that, in this particular recipe, the lemon juice acts as the glue that holds the whole flavor together.

But that’s not the only reason lemon juice made the cut for this recipe!  It keeps the health benefits coming, as well.

Lemon juice is full to the brim with vitamin C.  And high vitamin C consumption has been shown to improve immune system function, lower blood pressure, and even enhance heart health.

Many of you are likely familiar with the sweet flavor of oregano from your favorite Italian cuisine.

While traditional in lasagnas and pastas, this sweet spice is unconventional in Argentinian chimichurri!  It adds a unique fullness to the flavor of our recipe that we absolutely love!

And, of course, I should also mention its health benefits!

Oregano is definitely more than just a tasty addition to this amazing recipe!

A dip and marinade, chimichurri needs a thick, liquid base that lets you smother your food in its rich spices.  We chose olive oil to create that volume and texture!

Olive oil is one of the healthiest oils on the planet.

This is because, compared to other oils, olive oil is easier to produce, requires less processing, and is naturally full to the brim with healthy omega 6 and omega 3 fatty acids.

The consumption of these key healthy fats has been shown to reduce inflammation within the body, as well as the risk of heart disease and diabetes.

And did I mention it tastes amazing?  It literally is the optimal addition to chimichurri, proving the condiment with both its famous consistency and a large portion of its amazing flavor.

Now, while we do have quite a few ingredients to work with, the prep for your chimichurri is super simple.  This 5 step recipe will take you 5 minutes, max!

The Best Vegan Donut Recipe – Ever!

Healthy Mayonnaise Recipe: Whip Up this Delicious Sauce in 10 Minutes

How to Make Fresh Lemonade Without Sugar