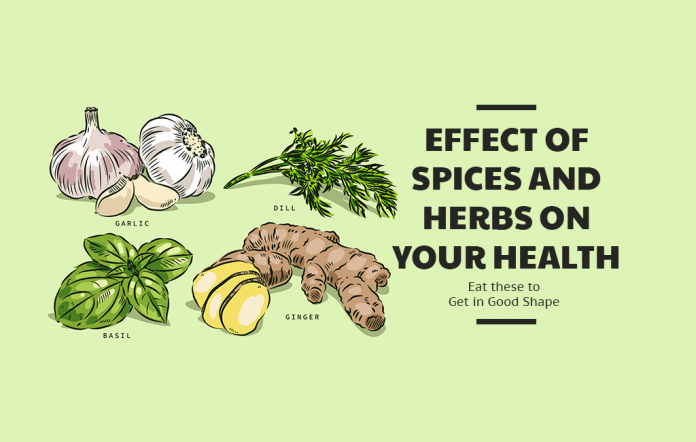 Spices and herbs are both of plant origin.  Whilst herbs come from the leafy, or green parts of a plant, spices come from the remaining plant material such as the bark, roots, flowers, berries or seeds.

These versatile plant foods have been used across the globe for thousands of years, both in culinary use and in traditional medicinal practices.  They featured particularly heavily in the diets of ancient Egyptians, Mesopotamians, and Sumatrans.  Some civilizations even used spices as currency, rather than gold!

Why should a diet rich in spices and herbs provide health benefits, though?

That’s because these whole plant foods are rich in phytonutrients (protective plant chemicals) that possess anti-inflammatory, antioxidant and immunomodulatory properties.

Let’s take a look at these properties in more detail!

How Do Herbs and Spices Exert Their Positive Health Effects?

Inflammation can be either acute or chronic in nature.  Acute inflammation is a defense mechanism. It usually results from exposure to infections, allergens or injury — it’s your body’s way of trying to protect you from something that could cause harm.  This type of inflammation is generally brief.

Chronic inflammation, on the other hand, results from a range of environmental and lifestyle factors.  These include stress, obesity, alcohol consumption, tobacco use and certain aspects of the diet.  This type of inflammation can persist for a long time.  Current research suggests that it could be partly responsible for the significant increase in chronic diseases — such as heart disease, cancer, metabolic syndrome, and digestive disorders — in recent years.

Whilst oxidation is a type of reaction that happens continuously and is perfectly normal, oxidative stress results when there is an imbalance between the number of free radicals and antioxidants present in the body.

Free radicals are unstable molecules that can attack molecules, such as DNA.  The oxidative damage that free radicals cause can lead to cell death, with a domino-like effect. This may, in turn, accelerate aging and the development of various diseases.

Antioxidants are compounds which have the ability to prevent this damage from occurring in the first place. They do this by reacting with free radicals and thereby rendering them unharmful.

While the body is able to produce its own supply of antioxidants, you can also consume them in certain foods.

Many spices and herbs are incredibly rich sources of antioxidants, with just small amounts able to deliver these compounds in abundance!

An immunomodulator is a substance capable of regulating the responses of the immune system. It can either have a stimulating effect (immunostimulators) or act as a suppressant (immunosuppressant).

Certain diseases, such as cancers and bacterial infections, either result from or cause a suppressed immune system.  Some patients may, therefore, benefit from an immunostimulator.   Immunostimulators boost the number of white blood cells, enabling the body to put up a better fight.

Autoimmune diseases, on the other hand, result when a person’s immune system attacks healthy cells.  In such cases, immunosuppressants may be beneficial to dampen the immune response.

Research has revealed that some spices and herbs possess immunomodulatory properties.

Common Herbs and Spices and Their Specific Health Benefits

Different spices and herbs possess different active ingredients, meaning that they are likely to each have unique health effects.  For example, some may be potent antioxidants, whilst some may act as inflammatory agents. Others will have a combination of properties.

Black pepper is one of the most commonly used spices throughout the world.  Its active ingredient, piperine, acts as an antioxidant.  As a result, it may prove beneficial in cancer prevention as well as in cancer therapy.

It also has anti-inflammatory properties. In animal studies, black pepper has demonstrated a protective effect on the digestive system, as well as the ability to prevent sepsis in bacterial infections.

Turmeric is available fresh, as a root, or dried and ground as a spice.  It has long been used in Indian and Asian cooking and herbal medicine. However, it’s now also gaining popularity throughout the rest of the world, due to its reported benefits.

Curcumin, the active ingredient in turmeric, has both anti-inflammatory and antioxidant properties.

Research suggests that it reduces chronic inflammation by suppressing the production and secretion of molecules that aid the inflammatory response.  It also induces apoptosis, or cell death, in certain cancer cells, suggesting an anti-tumor effect.

Data from several clinical trials show that curcumin may have therapeutic effects in patients with inflammatory disorders such as arthritis, metabolic syndrome and obesity.

It also demonstrates an ability to act as an immunomodulator.  By inhibiting the release of histamine — a compound released during the immune response that causes symptoms such as sneezing and itching — curcumin works as an immunosuppressant. It may, therefore, be useful in the treatment of allergic reactions.

Unfortunately, the potential health benefits of curcumin are not always attainable due to its poor bioavailability.  In order to promote better digestion and absorption, turmeric should be consumed together with a curcumin enhancer such as piperine, the active ingredient in black pepper.

Ginger has a long-standing history of use as a herbal remedy for nausea and other gut-related symptoms.  Researchers think it alleviates these problems by promoting contractions in the digestive tract and increasing the rate that food moves through it.  In recent years, data from research studies have supported the idea that ginger can improve nausea associated with pregnancy, chemotherapy and motion sickness.

Gingerols and shogaols, two classes of compounds present in ginger, have received a great deal of interest in the scientific community due to their potential anticancer effects.  Although not fully understood, research suggests that the potent antioxidative and anti-inflammatory effects of these compounds may promote the inhibition of cancerous cells.

Several studies also suggest that ginger could be an effective treatment for women suffering from painful menstrual cycles.

Peppermint is either consumed as a tea (from the plant leaves), as an extract (in pill form), or applied topically (as an essential oil).

It has antioxidant actions, and in animal studies has demonstrated an ability to have a relaxing effect on the digestive system.

In humans, the use of peppermint oil capsules is now widely accepted in the management of irritable bowel syndrome (IBS).  Administering these supplements to IBS patients — particularly in formulations designed to release in the small intestine — can reduce abdominal discomfort, bloating and several other symptoms of the condition.

Historically, parsley has been used in folk medicine to treat a wide variety of ailments, ranging from kidney stones to age-related cognitive disorders.

Yet another antioxidant, parsley prevents DNA damage and inhibits the growth rate of certain cancer cells in laboratory tests.

Studies on rats and mice have demonstrated promising results for the use of parsley in the treatment of various conditions.  For example, it may have a gastro-protective effect and reduce symptoms of inflammatory bowel disease (IBD), as well as an antidiabetic effect and the ability to prevent liver damage.

However, clinical trials are seriously lacking.  So, at present, it’s difficult to say whether these effects would apply to humans too.

Rosemary is a common culinary herb in many countries but is particularly prominent in Mediterranean diets.

While essential oils of the herb are often used for calming and muscle relaxant effects, ingestion of rosemary may also lead to numerous health benefits.

In several in vitro (lab-based) studies as well as one human study, administering rosemary led to a decrease in blood glucose levels, suggesting a potential antidiabetic effect. However, its effect on individuals with type 2 diabetes remains unclear.  It may also have a liver protective function as well as anticancer effects, due to its antioxidative activity.

As well as adding flavor to meals, herbs and spices may have a wide range of health benefits.

Although their impact on specific conditions may be difficult to determine, research shows that many spices and herbs contain active ingredients that have potent antioxidant and anti-inflammatory properties.  There has been a lot of research into the health effects of these properties, and the evidence suggests that they’re likely to be beneficial in the prevention and treatment of chronic diseases.

Herbs and spices are a safe and cost-effective way to increase intake of antioxidant and anti-inflammatory compounds.  So, if they’re not already present in your diet, maybe it’s worth making the addition!

Top 5 Foods to Fight Insomnia and Improve Your Sleep Quality