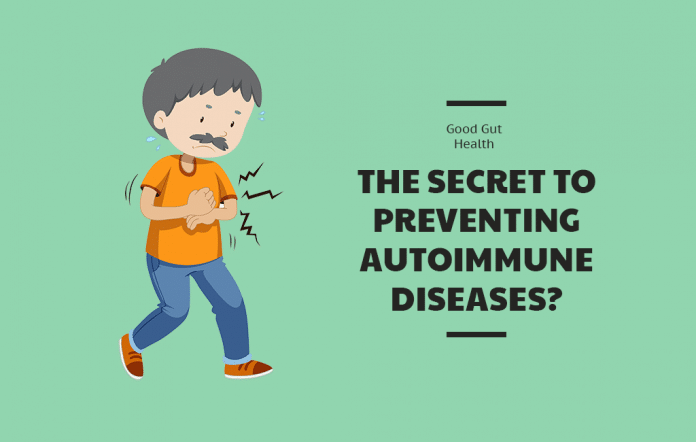 It’s pretty evident that people are concerned about having good gut health judging from the rise in probiotic products.

What but does it mean really?  And why do some people believe it can help prevent autoimmune disease?

What do you do when your own body turns against you?

For the 50 million Americans struggling with an autoimmune disorder, that is, unfortunately, not a rhetorical question or brain teaser.  It is a fundamental query that informs every decision they make, every minute of every day.

Their symptoms may differ, depending on which parts of their bodies are under assault (see Table 1), but the problem they each face is inherently the same — how do they stop their own immune system from disabling, disfiguring and killing them?

Luckily, they are not without options.  Decades of dedicated research has made remarkable progress in figuring out how autoimmune diseases cause their symptoms, and how they can be stopped.

There are now an amazing number of medications and treatment options available that really help manage autoimmune symptoms.

They have complicated names, and even more complicated mechanisms of action, but, in a nutshell, all of them aim to pretty much do just one thing: stop the immune system from attacking.

Some of these treatments do this by stopping signals from moving between parts of the immune system.  Others keep certain immune cells from being able to grow and divide.

Though these treatments work to keep autoimmune symptoms at bay, there is a glaring flaw in their design.  They keep the entire immune system from working.

Maybe they protect healthy body tissues from being attacked, but they also protect bacteria, parasites, viruses, and cancer cells, too.

Trading in autoimmune symptoms for an increased risk of a life-threatening infection or tumor?  Not a fun choice at all.

But, it is the best choice medicine can offer right now.  There is, as of yet, nothing doctors can do to stop the immune attack on healthy body tissues without also hindering immune attacks on actual infections or cancer cells.

This leaves those with autoimmune diseases in a rough spot.  They have to take medications that manage their symptoms, but these medications also put them at extreme risk for serious infections and cancer.

Now, there is no reason to believe that this will remain the case forever.

Researchers are hard at work developing better, more targeted treatments and are hot on the trail of any hint of a way to cure an autoimmune disease. Their dedication and the continual upwards progress in technology makes it likely they will, someday, find what they are looking for.

In the meantime, though, the downsides of the available treatment options make the best option for your overall health to not treat an autoimmune disease.

No, your best bet is to never treat an autoimmune disease, because you never developed one in the first place.

Researchers have identified a wide variety of dietary, lifestyle and environmental factors that can help protect you from developing an autoimmune disease, including:

(*Note that while these behaviors — drinking less coffee and alcohol about 4x per week — have been shown to be protective for various types of autoimmune diseases, they are also associated with other health risks.  Coffee consumption is protective for liver health and longevity, while consuming even small amounts of alcohol increases the risk of cancer.  You will have to weigh the risks and benefits of drinking coffee and alcohol for yourself.  It may be helpful to speak to your doctor or nutritionist, as well.)

The most important factor in preventing autoimmunity, though, may be protecting your gut health.

Studies over the last few years have identified an unimaginably sophisticated network of communication between the immune system, the gut wall, and the millions of bacteria living in your intestines (called the gut microbiota).

Amazingly, among these complex interactions, researchers found that gut health and the health of the gut microbiota are able to influence all three of the most important factors in developing autoimmunity:

Let’s look at each of these, how they influence autoimmunity, and how they are influenced by gut health in detail!

In many ways, autoreactive T-cells are the essential driving force behind an autoimmune disease.

T-cells are a type of immune cell designed to recognize and remember very specific molecules (usually bits of protein) from bacteria, viruses, parasites or cancer cells that you have already come into contact with.

Their job is to scan your body for stubborn intruders who try to get past your defenses after you’ve already beaten them back once.

If it finds one, it sends out an immediate alarm to the entire immune system to get back on the attack right now, and then starts multiplying like crazy to try and find other intruders.  (It is, after all, unlikely that one single bacteria slipped through all by itself — they usually live in colonies!)

In autoimmune diseases, just one single T-cell mistakenly recognizes a normal, healthy molecule in your body as the villain it’s after.  This is called an autoreactive T-cell.

When it comes across this molecule in your body and sounds the alarm, the rest of the immune system, which has no reason to think the T-cell made a mistake, charge in with all the fury they would with a real invader.  This is what really starts an autoimmune disorder.

How does your gut health influence whether you have autoreactive T-cells in your body?

It’s a little bit complicated, but basically, an unhealthy gut increases the total number of T-cells in your body.   This makes it more likely that one of them will accidently be autoreactive.

As I mentioned above, T-cells are made to remember foreign invaders that have made it into your body at least once.

An unhealthy gut is really bad at keeping foreign molecules out the way it is supposed to.  It lets in bacteria, viruses, toxins, bits of food, digestive juices — all kinds of things that normally, in a healthy gut, would not be allowed into your body or anywhere near your T-cells.  Once in the body, through the wall of an unhealthy gut, each of these molecules can trigger the production of a T-cell.

If, by sheer bad luck, one of the molecules that gets through your unhealthy gut wall and makes a T-cell looks an awful lot like a molecule that exists in your body, you have a problem.

Just like showing a police officer a blurry mug shot can result in the wrong person getting arrested — if they look similar — showing a T-cell a molecule that that is nearly identical to a molecule in your body, it can go after the wrong one, even if the details of the molecules are actually really quite different.  All at once, you have an autoreactive T-cell, simply because your gut couldn’t keep foreign molecules out of your body!

Th17 cells have a really important job in regulating your immune system.  They are actually responsible for telling T-cells whether they can attack anything — a bacteria, a virus, a parasite, a cancer cell, or your own body.  The T-cell can’t attack unless a Th17 cell gives it the go ahead.

In fact, when a T-cell recognizes a villain it wants to attack, if it’s not given the green light from a Th17 cell, it has to commit suicide.

So, though you absolutely need an autoreactive T-cell to develop an autoimmune disease, you also need unhealthy, overactive Th17 cells that just give “attack” signals all willy-nilly.

Unfortunately, an unhealthy gut can get your Th17 cells all wound up, essentially taking the brakes off the autoreactive T-cells it helped your body make!  It’s a gourmet recipe for autoimmunity.

How does an unhealthy gut get your Th17 revved up?

Changes in the way the walls of the intestine move send up red flags for Th17 cells in the area, likely because that is serious hint you may have a stomach bug (eh-hem — everything in the gut moving… fast).

Th17s are free to migrate through your body, though.  So, going on high alert in the gut can make them more likely to give an autoreactive T-cell in other parts of your body the go-ahead!

The third crucial factor in developing an autoimmune disease involves the dysfunction of yet one more group of T-cells, regulatory T-cells (Tregs, for short).

Tregs kind of do the opposite of what Th17 cells do.  They tell attacking T-cells, “Hey! That’s enough!  You can stop attacking and calling the rest of the immune system now!”

Not having enough active Treg cells around not only makes it easier for an autoimmune disorder to develop (it’s hard to get an attack going if you’re shut down as soon as you send up the alarm!), but also makes sure the attack keeps going and going.

It makes the disease chronic and keeps the attacked tissues and organs from healing.

Rounding out the autoimmune trifecta, an unhealthy gut also keeps your Treg cells from being activated, stopping them from halting T-cell attacks.

Remember those SCFAs I mentioned above that aren’t made by unhealthy bacteria?

Well, not only do they help calm Th17 cells, they also help activate Treg cells!  They do this by physically turning on an enzyme in Treg cells, called histone deacetylase, that is responsible for letting Treg cells be Treg cells.

See, histone deacetylase is able to turn on the genes that let a Treg cell do its job just like flipping a switch!  Without flipping that switch, the Treg cells are essentially powerless to stop a T-cell attack.

A healthy gut, with solid walls that let no molecules in, keep your risk of developing autoreactive T-cells low.

A healthy gut, full of healthy bacteria, makes plenty of SCFAs.  These SCFAs keep your Th17 cells from letting autoreactive T-cells actually attack your body.  They also boost your Treg function so you can, hopefully, nip any autoimmune attack in the bud.

And a healthy gut should have healthier gut wall movements, keeping your Th17 cells from suspecting you have a gut infection.

Together, these effects make maintaining good gut health an amazing tool for helping prevent the development of autoimmune diseases!

Though current autoimmune diseases treatments are life-savers for controlling autoimmune symptoms (sometimes literally), they are by no means perfect.  They present significant risks for serious side effects, like infections and cancer.  Preventing autoimmune disorders altogether is a safer strategy for protecting your long-term health and wellbeing.

Read Next: Best Probiotic Supplements for Leaky Gut [Based on Research and Reviews]