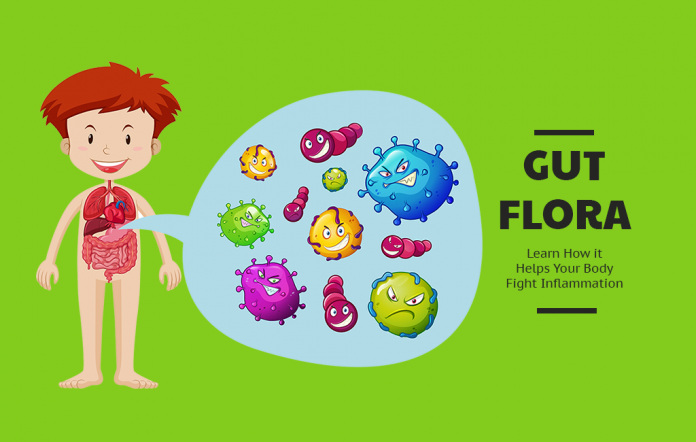 Inflammation is one of the body’s natural defense mechanisms. It occurs in response to either injury or the invasion of foreign matter.

Characterized by redness and swelling, inflammation describes increased blood flow and fluid distribution to the site of injury.  This happens in an attempt to flush the area with chemicals, antibodies, and essential nutrients.

This process is essential to clear out harmful compounds and initiate healing and regrowth.

While beneficial in the short term, however, inflammation can lead to a host of negative health implications if left unaddressed.

While inflammation can be triggered by a number of different things, one powerful trigger is the presence of microorganisms where they don’t belong.

Microorganisms contain structures that are alien to the human body.  As such, their presence triggers an immediate inflammatory response intended to remove them from the body.

And by defending against these external microorganisms, gut flora plays an integral role in fighting inflammation.  The Gut flora (also described as the ‘microbiome’) describes the many varied bacteria living throughout the digestive system.

Within the gut flora, we have good gut bacteria, and bad gut bacteria.  Good bacteria aid in both the defense and efficient digestive processes of the gut, while bad bacteria hinders them.

Read Next: Digestive Enzymes After Gallbladder Removal: Helpful or Hokum?

At any one time, there are both good and bad bacteria in the gut.  It is important to note that, while we will never be able to eliminate bad bacteria from our gut entirely, (as it is found in many of the ‘healthy’ foods we eat), we should strive to have a balance where good bacteria make up the vast majority of all our gut bacteria.  This will go a long way to improve the defensive function of the gut, therefore reducing inflammation.  Unfortunately, this isn’t always entirely possible!  It turns out, the relationship between good bacteria and bad bacteria within the gut is somewhat precarious!

See, if there are adequate good bacteria within the gut, your digestive system can breakdown your food easily and efficiently.  By breaking down the food we eat into smaller compounds, they become easier to transfer through the intestinal wall.  This process keeps your digestive system healthy. 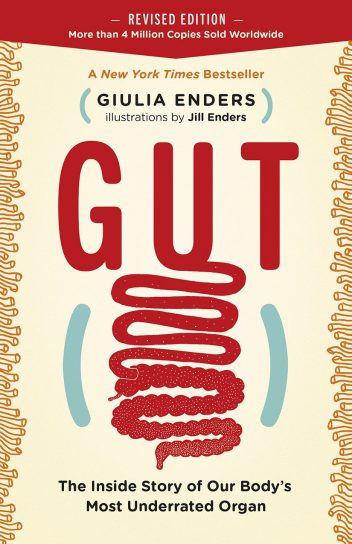 Get this book by Giulia Enders to learn more about the secrets of your gut.

If the gut has insufficient amounts of good gut bacteria, though, things look very different.  Your food stays in bigger chungs and the digestive system is left trying to absorb large, indigestible molecules.  These large molecules physically damage the wall of the digestive system, causing an inflammatory response in an attempt to heal this damage.  This occurs in conjunction with an increase in gut permeability (with the physical damage causing larger ‘holes’ to appear on the wall of the gut).

Additionally, if there are excessive bad bacteria within the gut, then these specific flora are actually treated as invaders themselves.  This can promote an inflammatory response within the digestive system.  (Antibodies and fluids rush into the intestinal wall of the gut to try to destroy the bad bacteria.)  This additional inflammation can lead to greater impairment of digestive processes, and may also damage some good bacteria.

Unfortunately, if the bacteria balance is not restored, the body’s digestive functions will remain compromised.  This can lead to a vicious inflammatory cycle.  As such, the maintenance of adequate good gut flora is essential to aid in the digestion of food molecules, making them easier to digest and absorb, and reducing inflammatory processes.  Additionally, these same good bacteria play an important role in keeping bad bacteria in the gut to tolerable levels.  This means good bacteria acts as the guts defense mechanism, saving the need for an inflammatory process, and further reducing inflammation within the gut.

Gut flora can also impact inflammation throughout the entire body.

As previously discussed, when the physical wall of the digestive system becomes physically damaged, we see a large increase in gut permeability.

This results in the gut easily allowing foreign matter and large molecules into the body, which then stimulates a protective inflammatory response as a means to destroy and remove these alien substances.

It is this systemic inflammation that has shown to impact a host of health markers in a negative manner, causing an increase in blood sugar levels, blood cholesterol levels, and cortisol levels.  With this, systemic inflammation can also cause damage to the walls of arteries and veins, leading to a vastly increased risk of heart disease.

With this in mind, having adequate good bacteria is essential to maintaining normal levels of gut permeability, and therefore stopping foreign substances from entering the body. This prevents systemic inflammation from starting in the first place.

In addition to this, good gut flora can reduce the secretion of inflammatory compounds (known as cytokines) throughout the body through the production of short-chain fatty acids (SCFAs).

Gut flora makes SCFAs from fiber.  Although fiber is essentially unusable for your cells, it can be fermented by good gut flora into these SCFAs.  These molecules interact with specific receptors within the human body (known as G protein-coupled receptors) reducing the severity of the body’s inflammatory response, reducing systemic inflammation after it has begun, and preventing it from returning.

Through these mechanisms, the gut flora plays an essential role in reducing inflammation throughout the entire body.

The gut flora makes up an extremely important, and defensive aspect of the digestive system.

Through its ability to promote efficient digestive processes, it can fight inflammation within the digestive system.  It can also inhibit inflammatory process throughout the entire body.