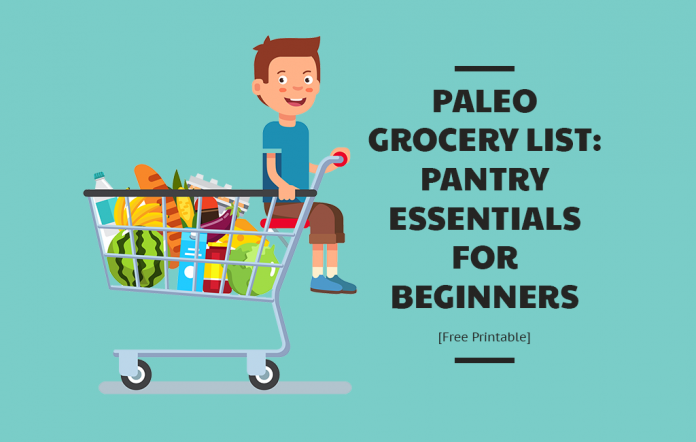 Smack-dab in the center of your friend’s fridge door, just beneath the tidy to-do list and cleaning schedule: a paleo grocery list.  Maybe you didn’t want to seem snoopy, or maybe you were both in a serious rush to get out the door to your evening’s festivities, but you didn’t go check it out, and now you’re curious.

What was on that list?  What does someone on a paleo diet actually eat?

Whether you’re curious about your friend’s life or you’re mulling over taking the paleo plunge yourself, I’ve got the answers to all your questions about the fundamentals of paleo eating, right down to what was (almost certainly) listed on your friend’s fridge!

What Does It Mean to “Go Paleo”?

As foreign as it sounds, “going paleo” (i.e. starting a paleo diet) is actually pretty straightforward.

Unlike many of the other diets that have become popular in the last couple of decades, the paleo diet is extremely free-form.  There is no calorie counting.  You don’t have to weigh or measure your food.  No one gives you a meal schedule you have to follow.  There are no complicated macronutrient ratio calculations.  Actually, there are no complicated calculations or rules of any kind.

So, how do you know what foods to eat on a paleo diet?

You follow a single, simple rule:  “Eat the foods your paleolithic ancestors ate.”

I can just see the face you’re making at me through your screen right now — the right eyebrow raised at a decidedly “why, exactly, would I want to do that?” angle.

Thankfully, this also has a pretty simple answer!  The paleolithic diet — the diet your ancestors ate from the emergence of the human species until the invention of agriculture 10,000 years ago — is the diet the human body evolved with.  It is, proponents argue, the “natural” human diet.

Alright!  So, what did your paleolithic ancestors eat?

The general consensus is that for the millions of years your ancestors roamed the world as bands of hunter-gatherers, their diets were based on large quantities of:

Their primarily plant-based diet was supplemented with varying amounts of:

There is still quite a bit of debate in the scientific community how large of a role animal-based foods had in most paleolithic diets.  In general, researchers think the evidence points towards a moderate intake of animal products, say around 35% of daily calories, with much of that frequently coming from fish and shellfish.  In reality, though, the exact amount probably varied from tribe-to-tribe and climate-to-climate.

Related: The Truth About Meatless Diets According to Science

What the paleolithic diet most definitely did not contain, however, were cultured grains, dairy, and domesticated chicken’s eggs.  Without modern technologies, paleolithic diets also obviously had no highly processed foods of any kind: no table salt, table sugar, processed oils, refined flours or anything made with any of these ingredients.

Though modern paleo diets do have just the one rule (“eat what your paleolithic ancestors ate”), looking at the list of foods consumed (and not consumed) on the original paleo diet, it’s easy to see how this translates to a set of sub-rules.

These basic sub-rules are:

Learn more about the paleo diet by clicking the banner below!

What Do You Eat on a Paleo Diet?

There are no real restrictions on how these foods are consumed in the paleo diet.  They can be boiled, steamed, baked, pureed, blended, mashed, dried. Basically, you can use any prep method you can think of, except perhaps deep frying, since this requires excessive amounts of unnatural, processed fats.

This means, depending on your taste preferences, your lifestyle, and the amount of effort you like to put into your cooking, dishes you could eat on a paleo diet include:

Really, you are mostly limited by your creativity!  If it’s free of grains, dairy, and processed junk and rich in whole-plant foods (with or without small-to-moderate amounts of meat or fish), it’s a green light for the paleo diet!

What’s the Difference Between Paleo and Ketogenic?

Wait a second?  No junk, no grains, no dairy.  Added plant foods and meat.  Aren’t those basically the same changes advocated in the ketogenic diet? Are paleo and keto the same thing by two different names?

Though the two diets are similar in many ways, they differ dramatically in a couple of details and in their goals.

The paleo diet, as you just discovered, aims to offer a “natural” human diet. It cuts out grains, sugars, dairy, and junk food not because they contain any specific nutrients but because they aren’t foods your ancient ancestors ate. The goal of the paleo diet is to more closely align your nutrient intake with the nutrients your body evolved to utilize.

The ketogenic diet, on the other hand, excludes specific foods based on whether or not they contain a specific nutrient: carbohydrates.

The goal of the ketogenic diet is to induce a metabolic state called “ketosis”. Your body enters this state when you eat so few carbohydrates (less than 50 g per day) and it’s forced to break down fat into ketone bodies to keep your nerves up and running properly.

Ketone bodies are the only fuel, besides sugar, that your nerve cells can use for energy, and they do so in a slightly different way than with sugar.  This change in nerve metabolism can some benefits for nerve health, particularly in those with certain neurological conditions, like epilepsy.

Read Next: The Ketogenic Diet and Fat Loss

Since the goal of the ketogenic diet is to simply keep carbohydrate intake super low, it doesn’t matter where the carbohydrates come from.  Someone on a ketogenic diet, for example, would not eat grains, processed sugars, or dairy (due to the lactose), just like someone on a paleo diet wouldn’t. But they would also avoid all fruits and starchy or sweet vegetables (like carrots, peas, and squashes).  Of course, fruits and a wider-range of vegetables are encouraged on a paleo diet.

What are Some Paleo Diet Benefits?

By cutting out processed foods and dairy and upping the intake of whole fruits and vegetables, the paleo diet can do some good things for your health.  Clinical studies suggest that paleo diets may be able to:

To reap these benefits, though, it appears you really have to stick to a paleo diet where your plant food intake is greater than your animal food intake — just the way the diet was really originally eaten.

There are a few studies showing “ad libitum” paleo diets — diets where people were allowed to eat anything they wanted, in any ratio, without emphasizing eating mostly plant foods — people’s blood cholesterol and triglyceride levels got worse even though they were working out really hard and losing weight.  That’s certainly not what you want!

So, though the paleo diet itself doesn’t “require” calculating anything out, it might be a good idea, at least if you’re just getting started, to keep an eye on your ratio between plant and animal foods.

Aim to keep the percent of your calories from animal foods at no more than 35%.  In fact, you might want to aim for comfortably under 35% because, as the original paleo theory paper points out, today’s meat and fish are not your ancestor’s meat and fish.

Commercial meat is much higher in fat, especially saturated fat, than the meat your ancestors ate.  And today’s fish are loaded with heavy metal and pesticides that would have been completely absent in the ancient world.

Adjusting your intake just a touch to account for those health-harmful changes in the quality of these foods can only protect your health.

Alright — a plant-heavy diet rich in fruits, vegetables, nuts, and seeds, with meat and fish, no dairy, no grains, and no junk.  How can that be translated that to a practical paleo grocery list?  Here’s your solution (and I’d bet good money it’s pretty darn close to the one you zipped by at your friend’s house!)

If you’re interested in this paleo grocery list for you (and not your friend!) and you’re just dipping your toe into the sea of paleo foods, you may find yourself a little overwhelmed at the thought of trying to pick out all the new paleo-specific products you’ll need to add to your grocery cart.

Luckily, you don’t just have to take the plunge and figure everything out all on your own!  There are lots of people who’ve been paleo for months or even years and they’ve put in lots of taste-testing, price-gaging, practicality-measuring legwork for you.  All you’ve got to do is check out their favorite products and you’ll be totally on the right track.

To help get you started, I’ve compiled some of the most beloved paleo products on Amazon into the table below!  Check out what customers had to say about why they love these products and you’ll know what you need to be on the lookout for.

Paleo-pro wisdom can be a lifesaver for non-food paleo products, as well. Based on my research, those who’ve been following a paleo diet for a while swear you’ll be a much happier camper if you invest, from the get-go, in:

This paleo grocery list may offer some health benefits.  These foods include lots of fruits, vegetables, nuts, and seeds with small to moderate amounts of fish and game.

Translating these broad dietary strokes into practical, modern recipes and straightforward trips to the store can be tricky but with a little organization and a handy-dandy printable paleo grocery list, you can get the hang of it in no time. If you would like to learn more about the paleo diet, click on the banner below!

Not convinced? You might also want to compare the Paleo Diet against the 5:2 Diet!