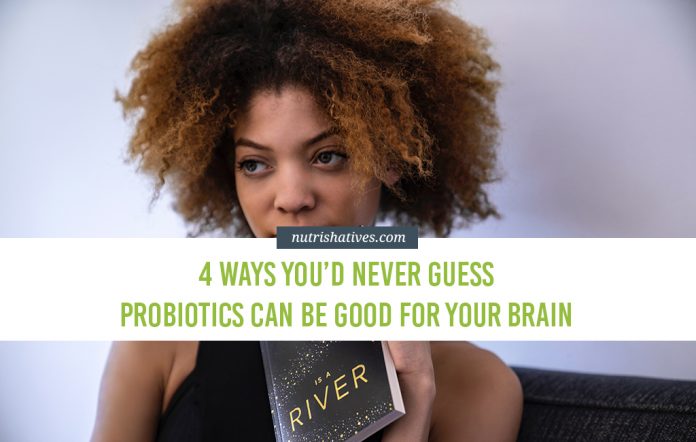 This thinking helps us to feel a sense of causality and organization.

For example, probiotics “colonize” the gut. So, we expect effects on the health of our gut when we consume them.

We don’t, however, expect effects on organs far away from our digestive system — like our brains!

Learn More: What Are Probiotics? Benefits, Dangers, and Best Sources

Of course, if we take a moment, the idea that all of your bodily systems are separate doesn’t actually make much sense.

Even the simplest processes require cross-talk between your bodily systems. For example, your endocrine system (system of hormones) helps tell your brain (your nervous system) when you are feeling hungry or full (digestive system).

So, in reality, the idea that probiotics can be good for your brain isn’t that far-fetched.  And it’s true!

A recent study in Nature Reviews Neuroscience clearly shows that stomach bacteria actually communicate with the central nervous system through nerves and hormones to influence brain function and behavior.

“Good” bacteria can help make sure everything is working as well as possible.   But “bad” gut bacteria can cause communication problems between the brain and the body!

How exactly do “good” bacteria (like those in probiotics) keep everything working healthily and prevent brain conditions?  Well, that depends on what condition you are talking about.

And we’ll get into the details in the next few paragraphs.

Benefits of Probiotics for Your Brain

It is clear that stress can alter healthy gut bacteria.

People who experience chronic illnesses, for example, also tend to have a poor population of “good” gut bacteria, making way for the ones that cause sickness and inflammation.

The mechanisms seem to have to do with something called GABA receptors in the brain.

GABA is the main central nervous system neurotransmitter (communicator for the nervous system).  It is one of the main actors in helping to make sure your body is working as it should.

Certain types of bacteria in the gut have the ability to change the number of GABA receptors you have in your brain. This, in turn, can reduce stress, anxiety, and depression.

How do the bacteria do this? Well, they appear to “communicate” with the brain via the gut-brain axis and the vagus nerve, telling the brain to produce more GABA receptors.

A 2015 study by Steenbergen et. al of Leiden University published an article in Brain, Behavior, and Immunity where they describe a clinical trial to test if a multi-species probiotic containing Bifidobacterium, Lactobacillus, and Lactococcus strains had an effect on sad mood.

In the study, 40 participants were assigned either a control or a probiotic supplement to take over 4 weeks.

These results show that there is great potential for probiotics to be included as part of a larger approach to improving mood, and, hopefully, one day, depression.

Taking probiotics has also been shown to be effective in preventing infection after brain surgery.

One study, in particular, found that not only were patients who got probiotics less likely to get an infection but they also got to go home from the hospital earlier.

4. Easing the Symptoms of Autism

Since science has found the link between the gut and brain, there has been a growing interest in whether probiotics could also affect autism.

The connection seems logical, especially since people with autism appear to have different gut bacteria than people without autism.

So far, the effects of good bacteria on autism have only been examined in the lab.  Initial results, however, are promising.

For example, a review found that when individuals with autism took probiotics, they saw:

Scientists have shown that there are many strains of probiotic bacteria that are good for your brain.  Most of them are from the Lactobacillus, Bifidobacterium, and Lactococcus families.

Some names to look out for include:

There are dozens more strains of probiotic bacteria that may be beneficial but more research is needed.  It is important that you talk to your doctor to discuss what strains and dosages are best for you.

This brand is a multi-strain probiotic that contains most of the strains mentioned above.  It contains 23 strains of probiotics, is kid and infant friendly, and has 4.5 stars on Amazon.

A best-seller on Amazon, Hyperbiotics Pro15 has a patented delivery system to the gut.  This ensures that a significant portion of the probiotic population makes it to the right place.  It contains five of the strains mentioned above.

This is a good option if you have never taken probiotics before, or if aren’t sure how your digestive system will react.  It contains fewer strains of probiotics (six, to be exact), five of which are in the list above.

There is growing evidence demonstrating that, in addition to promoting a healthy gut, probiotics can also be good for your brain.

The evidence demonstrates the inter-connectivity of different body systems and encourages us to look at health more holistically.

Stomach bacteria affects the brain in ways scientists would have never imagined as little as ten years ago.

Thanks to recent research, we know that probiotics can help prevent infection after surgery from traumatic brain injuries, improve mood-related disorders and autism, and improve symptoms of stress-related anxiety and depression.

There is still a lot of research to do on the subject but the initial findings are very promising.