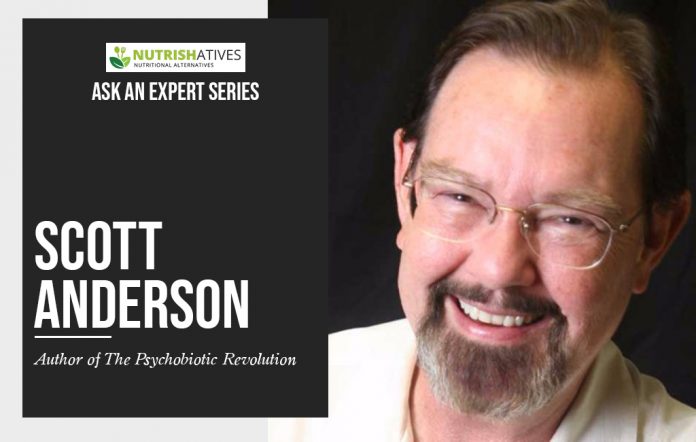 Scott Anderson is a jack-of-all-trades

he works primarily as a scientific journalist reporting on developments in technology and health, he is also an accomplished computer software designer (helping create the wildly popular game, Lego Island, in the 1990s), food developer (with Freedom Health, LLC), and the author of several books.

His most recent book, The Psychobiotic Revolution: Mood, Food, and the New Science of the Gut-Brain Connection, has been creating some peristaltic waves (*wink, wink) in both the health community and the general public!

Co-written with Dr. Ted Dinan and Dr. John F. Cryan (two of the leading researchers in the field of gut-microbe-brain interactions), The Psychobiotic Revolution outlines the amazing discovery of our gut microbiota, how it influences our mood and cognition, and what those influences mean for our everyday lives!

We were so excited that Scott agreed to answer some of our burning questions about those gut-brain-healthy-living interactions and his unique and fascinating career!  Here are his expertly crafted answers!

This is part of Nutrishatives’ Ask an Expert Series, where we chat with movers and shakers in health, wellness, nutrition, and lifestyle medicine about their careers, their current work and their expert opinions on… well… their area of expertise!

Computer software designer, food science consultant, science journalist and book author — what a unique curriculum vitae you have! Could you talk a little bit about how your career has developed and what drew you to science journalism, in particular?

My so-called career is like a yard sale.  It runs in my family.

My older sister, Dr. Ann Kiessling, is a leader in stem-cell technology, but also pursues IVF research and runs a working farm.  Before she heads out for her lab in the morning, she milks a dozen goats to make a heavenly yogurt and to-die-for cheese.  She, in fact, is the person who told me over 20 years ago that many more diseases than we suspected were likely caused by bacteria.

Writing also runs in the family.  My dad, William C. Anderson, was a WWII bomber pilot who wrote sci-fi and war novels, including BAT21.

No one discouraged me from getting excited about nerdy subjects from the rigors of physics to the messiness of biology.  No one forced me to choose, so I soaked up a sweeping story of nature, from the strangeness of quarks to the gnarliness of the human brain.

Modern life rewards specialization; we are expected to know more and more about less and less.

Today, a biophysicist may have a hard time understanding a biochemist even though they are studying the same lifeforms.  Unable to choose just one subject, I found that science journalism allowed me to study them all.

I’ve been writing articles and books about technology and science for some 30 years now.  Damn, I’m old!

Even a brief glance over your resume and books makes it abundantly clear that you have a seriously wide range of interests! What initially drew your attention to the gut microbiota and mental health?

I was invited to Ohio to set up a laboratory to create dietary supplements for animals and humans.  I noticed that a product we made to help horses heal their colon ulcers also improved their attitude.  A biting, fidgeting horse became noticeably calmer and easier to train.

Then I read about a couple of brilliant scientists named John Cryan and Ted Dinan from University College Cork in Ireland.

They had found that certain microbes could affect mood, including depression and anxiety.  It turns out they were familiar with my writing, and after some , we agreed to write a book about what they were calling ““.

My eclectic background was actually a plus!  People in this field need to know about neurology, microbiology, immunology, endocrinology, gastroenterology.  The connections between these fields are fascinating!

Like any good title, Psychobiotic Revolution certainly makes most people do a double-take! “Psychobiotic” is, after all, a brand-new word that few will have encountered before finding your book! Could you explain the meaning behind “psychobiotic” and how the word was developed?

“Psychobiotic” is a term coined by Ted Dinan, who is a psychiatrist as well as a researcher.  He defined psychobiotics as “live organisms that, when ingested in adequate amounts, produce a health benefit in patients suffering from psychiatric illness”.

It’s basically a mashup of psychoactive and probiotic.  The word is certainly eye-catching, although some people think it sounds a little sinister.  It has taken a while, but it’s starting to catch on.

If psychobiotics prove to be the future of mental healthcare, based on the research we have now, which conditions do you think will be treated most effectively by addressing poor gut health?

At first, I thought the main impact would be on helping people with depression and anxiety.  That’s not a small population, as some 350 million people worldwide are afflicted by these mental problems.

But the deeper we dug into it, the wider the scope became.

When your gut is unbalanced or challenged by pathogens, it can become leaky.  That can lead to systemic inflammation which is now understood to be behind dozens of the most dangerous diseases we know of, including heart disease, diabetes, Parkinson’s and Alzheimer’s.

It is truly a sobering list of maladies, and they all seem to start in the gut!  In the book, we show people how to deal with each of these problems.

Without getting spoilery, can you share with our audience the most shocking or surprising thing you learned about the gut microbiota and/or mental and neurological health during your research for your book?

So many things are upended with this research.

Mother’s milk contains bacteria!  Your microbes may control your cravings!  You have one hundred times more bacterial genes than human genes in your body!

The revelations are simply astonishing.

You were eyeball-deep in all the latest psychobiotic research for months on end! What did you come across that you felt you had to immediately implement in your own, daily life?

I tried dozens of probiotics but didn’t find anything that made a big difference.

We are still early to this research and no one really knows what the proper dosage should be.  But I tried a prebiotic ( that feeds your beneficial bacteria) that changed my life.

I’ve suffered from gut issues since the day I was born, but less than 4 grams daily of something called GOS () made everything work.

I’m not a small dude; the idea that something that small could make such a change is remarkable.

If our readers wanted to make a single lifestyle change to try to boost their gut microbial health and protect their mental well-being, what would you recommend?

Not to fudge on the question, but there are at least two top-line items to fix.

The second is to stop eating processed food and instead start eating veggies with lots of fiber like artichokes, onions, asparagus and others that we list in the book.

One is to reduce exposure to antibiotics, which are like gut bombs that indiscriminately kill our good bacteria along with the bad.  We vastly overuse these powerful chemicals.

Your beneficial gut bacteria depend on fiber and processed foods are slowly killing them.  Over the last few decades, we may have driven some important species to extinction!

We are just scratching the surface of the complex interactions between the human body and the gut microbiota.  Based on what you’ve seen in the research so far, do you have any gut feelings (pun fully intended!) about where the field is headed and the types of interactions we’re likely to discover in the near future?

If our current understanding is correct, leaky guts may allow bacteria to create systemic inflammation that is at the root of most modern chronic diseases.

Healing our leaky guts may help us to fend off some of the most important diseases of our day.

Changing your gut microbes is surprisingly difficult, so some of the most important advances will include fecal transplants (where you get poop from a healthy person) and possibly phages, which are pathogen-eating viruses.

There’s a lot you can do today, but tomorrow holds even greater promise!

You caught on to the importance of the gut-microbiota-brain axis well before it was on most people’s radars! Do you have your eye on any other burgeoning areas of research that may be about to change our understanding of ourselves or the world we live in?  Are there, perhaps, other book plans in the works for any of these groundbreaking fields of study?

I am looking at many interesting areas of research, from AI and deep learning to some new breakthroughs in health-span.  But there is still a lot of magic to be found in the microbiome, and I’m currently working on another book with my two co-authors on stress.

Especially with today’s crazy headlines, stress is destroying the lives of millions.  We will show some ways to hack your stress circuits and get centered again.

Do you have any other exciting new projects coming up that we should keep our eyes peeled for?

I’m working on a few very interesting projects, but I’m completely tied up in non-disclosures at this point…

Well, what a perfect, enigmatic little comment to end on!  Guess we all the perfect reason to keep an eye on Scott’s twitter feed, now don’t we!

Don’t want to wait for a tweet-official project update when the non-disclosures are lifted to hear more from Scott? No worries!  You’ve got plenty of options in the meantime!

If you haven’t yet, you can snag yourself a copy of The Psychobiotic Revolution, either as a physical book or an ebook for your Kindle by clicking here or here!

7 Expert-Backed Healthy Habits to Start in 2020