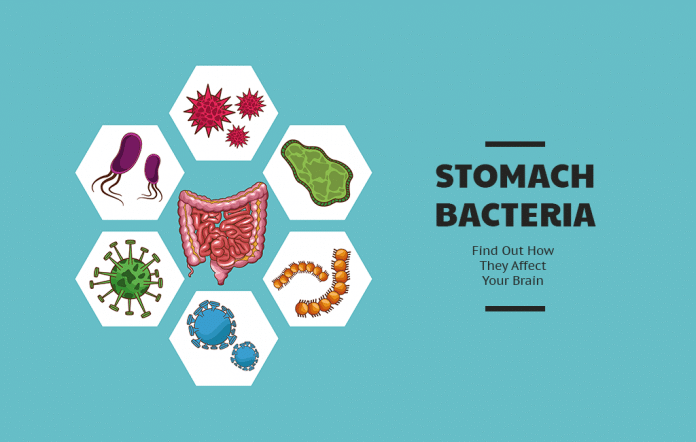 Over the last five years, scientists have discovered links between various types of stomach bacteria (also called your gut microbiota or flora) and every mental disorder that we know of, including:

Since this is such a new field of research, most of the studies thus far have been aimed at answering do and are questions.  Do people with depression have different stomach bacteria?  Are the numbers of stomach bacteria different in children with autism?

As these questions have slowly been answered, recent studies have begun to delve into the nitty-gritty questions of how and why.  How do bad stomach bacteria cause depression?  Why do different numbers of stomach bacteria trigger autism in children?  While there is certainly more to be discovered, these early studies have already found some compelling evidence pointing towards answers to these questions.

Let’s explore the six ways your stomach bacteria influence your brain function that scientists have identified so far.

When your gut flora is healthy, they prevent your immune system from making too many pro-inflammatory compounds.  The main job of pro-inflammatory compounds is to create inflammation when you have an infection or an injury.  They do this primarily by changing the functions of cells around the infection or injury.  But they also do it by influencing your brain function.

Pro-inflammatory compounds made anywhere in the body can enter the bloodstream and flow to the brain.  There, they act as a danger signal, warning your brain that you are injured or sick.  Your brain then changes your behavior to help you heal and protect you from further injury.

Really, the idea is very similar to a smoke detector in your home.  If there is a fire anywhere in your house, it produces compounds (smoke) that float through the air to your smoke detector.  The detector recognizes the danger and starts beeping.  This tells you to change your behavior and care for yourself, here, by getting out of the house and away from the fire.

When you are sick or injured, though, your body doesn’t want you to leave the house.  Quite the opposite – it wants you to sleep, rest and avoid danger.  It gets you to do this by decreasing the production of serotonin and dopamine (the happiness hormones).  This makes you feel slightly depressed — tired, with a lack of interest in doing things or being around people.  All of these feelings help make you rest and recover.

While this response is helpful in the short-term, long-term decreases in serotonin and dopamine can have serious consequences for your mental health.

Over time, lack of serotonin and dopamine damages your nerves, keeping them from firing normally.  Loss of normal nerve function in the brain can promote the development of anxiety, neuroticism, Parkinson’s disease, and obsessive-compulsive disorder.

In addition to keeping your levels of happiness hormones from dipping by regulating your immune system, healthy gut bacteria can actually make more of them for you.

For example, two groups of good bacteria, Streptococcus and Enterococcus, can make serotonin that you can absorb and use.  Another group, called Escherichia, can actually make both serotonin and dopamine.

Your good stomach bacteria can also boost your levels of a hormone called γ-amino butyrate, or GABA for short, by making it for you.  While not a happiness hormone exactly, GABA still helps boost your mood by blocking negative signals, like depression or anxiety.

If preventing inflammation and making happiness hormones for you weren’t enough, healthy stomach bacteria can also send signals to your brain, telling it to make more happiness hormones of its own.  They do this by activating your vagus nerve.

Your vagus nerve is one of the longest and most important nerves in your body.  It starts in your brain and has branches that reach to all your major organs, including your intestines.  Elegant studies on mice have shown that some species of good stomach bacteria can activate your vagus nerve where it reaches your intestines, causing it to fire into the brain more often.

Frequent signals from the vagus nerve into the brain are important for keeping levels of serotonin, dopamine and GABA high.  For this reason, vagus nerve signals are believed to help prevent and reverse anxiety and depression.  In fact, stimulating the vagus nerve to fire more frequently is an FDA approved treatment for depression.

Not only can good bacteria boost brain levels of GABA (the hormone that suppresses depression and anxiety signals in the brain), they can also increase the number of GABA receptors on your brain cells.

See, hormones in the brain can’t actually go inside brain cells and tell them what to do.  They have to attach to their receptors on the cell surface, kind of like a key fitting into its lock.

Increasing the number of GABA receptors on your brain cells increases how quickly GABA can find its receptor.  This lets GABA calm depression and anxiety signals in the brain more efficiently.

Scientists aren’t entirely sure how your good gut bacteria increase the number of GABA receptors in your brain, but they think it might be a result of increased signals from your vagus nerve (see above).

5. Keeping the Genes in Your Brain Cells Turned On

Turning off genes in your brain that are supposed to be on keeps your brain from working properly.  Studies show that depression, Parkinson’s disease, and schizophrenia may be caused by too many of your normal brain genes being turned off by your HDACs.

Healthy stomach bacteria keep your genes turned on by blocking the function of your HDACs.  They do this indirectly through a molecule called butyrate.  Your good stomach bacteria make butyrate when they break down fiber from your food for energy.  Butyrate then enters your body and turns off your HDACs.

One of these neurotoxins is ammonia.  Ammonia can be made by bad stomach bacteria when they break down protein.  Once made, ammonia is easily absorbed into the body.  Most of the time, your liver can detoxify the ammonia before it damages your brain cells.  If your liver isn’t working very well, however, some ammonia can sneak past and get into your brain.  This can lead to decreases in your ability to think and reason (decreased cognition).

Though scientists have only just begun researching how your stomach bacteria affect your brain, they have already established remarkable links between the two.  Healthy stomach bacteria increase levels of happy hormones, boost the number of receptors for mood-boosting molecules, improve vagus nerve signaling to your brain and keep genes in your brain turned on properly.

On the other hand, bad bacteria can produce neurotoxins that impair normal brain function.  Through combinations of these mechanisms, decreases in the health of your gut bacteria have been shown to be involved in the development of many mental conditions, including depression, anxiety, neuroticism, schizophrenia, obsessive-compulsive disorder, Parkinson’s disease, and autism.