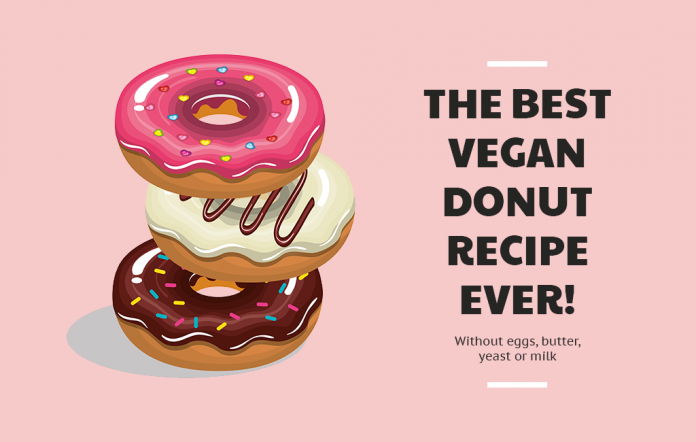 It’s true!  This vegan donut recipe is a reality.

You can enjoy delicious donuts without eggs, butter, yeast or milk.

If you are someone who thinks that vegan versions of classic desserts are usually a fail, we encourage you to give these a shot.  They are delicious!  Moist, fluffy, and bursting with taste — and made purely with vegan-approved ingredients.

Whether you are vegan or are simply trying to follow a healthier diet, this recipe produces vegan donuts that are the perfect post-meal dessert or mid-afternoon snack to enjoy with your tea!

Related: How to Train as a Vegan Athlete: 4 Tips from an Exercise Expert

How Does This Vegan Donut Recipe Work?

This might seem like a silly question, but if you’ve done or seen any traditional baking before, you know that yeast, eggs, and (sometimes) milk, are key ingredients in the process.  So, how do vegan donuts stay true to donuty-goodness?

There are some key switches made in the vegan recipe that keep the fluffiness and the moistness that the animal-based ingredients normally provide.

Applesauce and Coconut Oil Instead of Eggs and Butter

Applesauce is a common switch for eggs in low-fat baking.  Since diets moderate in fat are important for people on the journey to establishing healthy a healthy lifestyle, the goal for making the switch isn’t to lower the fat content.  Instead, with applesauce and coconut oil, we are preserving the moistness of yummy donuts without the fry factor or the eggs.

And, by the way, the applesauce also has the benefit of making the donuts taste like apple-cinnamon goodness.

Baking Powder, Vinegar, and Cashew Milk Instead of Yeast

Did you ever make a volcano with baking soda and vinegar at school?  It creates quite an explosive effect, doesn’t it?

Now, of course, we don’t want our donuts exploding with bubbles, but we do want them to fluff up.  The vinegar in this recipe doesn’t make the baking power bubble up like it would mixed with baking soda alone.

But, together with the cashew milk, it does add moisture which is needed for the baking powder in the recipe to activate and start creating carbon dioxide bubbles that will instantly give your dough the fluff it needs.  Go, science!

Baking Instead of Frying

Ok, so frying is technically vegan-friendly as long as you use vegetable-based oils. However, baking is a much healthier choice for cooking.

When frying, oil decomposes into compounds that can be detrimental to your health, including trans fats and oxidative compounds.  With baking, on the other hand, food is cooked with dry heat rather than high-temp oil.  The resulting texture is more like a cake donut, rather than a greasy, fried donut, but it is much, much healthier for you.

So, in case you were doubting, now that you’ve learned how carefully our vegan donut ingredients were thought out to make sure you don’t miss out on the true donut experience.

Oh — last thing before we get started — since we aren’t frying the donuts and the dough is more liquid than it is for non-vegan donuts, you are going to need some donut molds.  You can buy the donut molds at your local baking shop or through Amazon.  This is our favorite mold!

Now, how about that recipe?!

And of course, the last and most important step – enjoy!

Whether you are vegan or not, this vegan donut recipe is worth trying out.  They are healthier than conventional donuts, have a delicious apple-cinnamony taste, and only take about 30 minutes to make.  That’s quicker than running out to the donut shop!

Like this simple, healthy, and tasty recipe?  Then you’ll love our blueberry smoothie recipe, too! 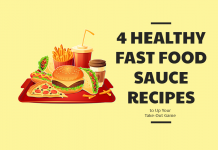 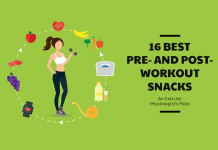 Healthy Mayonnaise Recipe: Whip Up this Delicious Sauce in 10 Minutes 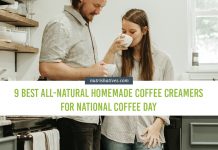 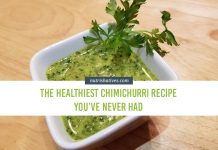 How to Make Fresh Lemonade Without Sugar