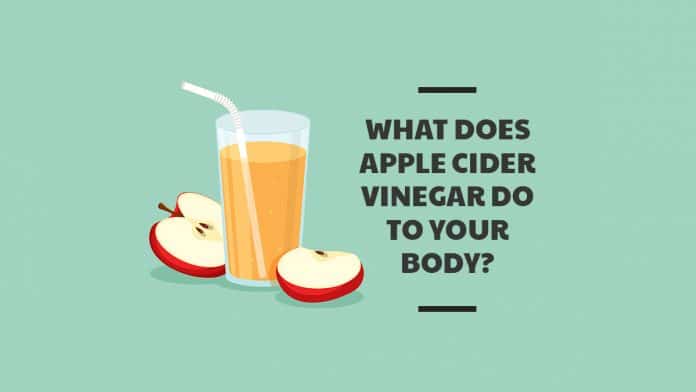 Ever wondered what apple cider vinegar does to your body? Wonder no more! Here Miranda, a nutrition scientist, breaks it down for you!

Because, boy did it.  All at once, the apple cider vinegar fat-burning-weight-loss memes were everywhere.

For a hot minute, you could not log onto social media without seeing at least one of these little buggers cheerleading the metabolic and weight loss benefits apple cider vinegar on your feed or wall.

Then, nearly as abruptly as they appeared, they kind of fizzled out and vanished.

But then something strange happened.  The memes came back. And kept on coming back.

Every few months now, they reappear. They make their rounds through circles of friends and then fade back into the background.

This has finally got me wondering: is there truth to their claims after all?

Time to see what the science says!

What is Apple Cider Vinegar?

Apple cider vinegar is unfiltered apple juice that has undergone a double-fermentation — once with yeast, and once with bacteria. This makes it rich in a chemical called “acetic acid”.

Figure 1 below shows the process of turning apple sugar into acetic acid.

An Acidic Apple Juice a Day Keeps the Doctor Away?

Apple juice with some organic acid mixed in.  Seems an odd thing to suddenly bestow health-food status on.  Where did the idea that apple cider vinegar is healthy even come from?

Turns out, folk medicine!  The belief that vinegar has health-boosting properties has, apparently, been around for thousands of years, starting at least as early as the ancient Greeks.

Well, what do you know?  Looks like the apple cider vinegar craze isn’t quite as out-of-the-blue as I thought.

There are some great things in folk medicine (willow bark for killing pain or a turmeric paste for wound healing, anyone?). But they are mixed in with utter nonsense.

Some of it is silly nonsense (like getting rid of your migraine by tying a dead mole to your head).

Clearly, just because something was reported to be helpful in folk medicine doesn’t mean it really is helpful.  How do you know if apple cider vinegar is great for your health, silly, or dangerous?

You have to turn to controlled, scientific experiments.

Let’s tackle these one at a time!

It appears apple cider vinegar may really decrease your appetite!

In a study carried out in Sweden, people given the same meal of white bread with different amounts of vinegar reported significantly increased feelings of fullness after the meal.

The effect was dose-dependent. That means that the more vinegar the subjects soaked their bread in, the fuller they felt.

In fact, the group that had the most vinegar (about two tablespoons) actually reported feeling more than twice as full as the group that just ate bread did.

And it’s not because the vinegar really “filled them up”! That volume of vinegar only adds about five calories to a meal!

Researchers suspect that this effect comes from vinegar’s ability to slow down the rate food leaves your stomach.

See, when the acid from your stomach is too strong (e.g. from having acidic vinegar added to it) it can make it hard for your small intestine to buffer it down to the safe pH.

If your small intestine notices that it’s becoming too acidic, it sends signals back to the stomach to slow down the flow of food and acid. This gives your intestines more time to make buffer and protect itself!  And it keeps food in your stomach longer, keeping you feeling full.

This was a small study, though, (only 12 healthy people participated). So, these results will have to be replicated for us to be 100% sure it really works for everyone.

Nevertheless, this experiment makes this meme claim much, much more credible.

A slightly bigger study (155 participants) out of Japan found that adding one or two tablespoons of apple cider vinegar to the daily diet helped overweight individuals lose weight.

Those drinking one tablespoon of diluted apple cider vinegar each day started losing weight within two months. Total, they saw a weight loss of about 2.5 lbs in three months.

Those drinking two tablespoons lost weight within a month and lost around 4.5 lbs in three months.

Fascinatingly, all of this was without any significant changes in diet or exercise.  That means these effects were not just due to those drinking the vinegar eating less because they felt fuller!

How else might apple cider vinegar help you lose weight, then?

It looks like there are two likely mechanisms involved:

Researchers think apple cider vinegar may be able to increase your body’s ability to burn fat by increasing the levels of a molecule made from acetic acid — acetate — in your blood.

Acetate is able to directly regulate your metabolism by activating one of the most important metabolic enzymes in your body: AMP-kinase.  Activated AMP-kinase tells your body, “Hey, we need some extra energy out here! Let’s start burning fat, rather than storing it!”

Acetate can hijack AMP-kinase, turning it on even when you have plenty of energy around.  This helps keep your body in fat burning mode, all the time, helping you lose or stop gaining weight!

Protecting Your Gut Health to Help You Lose Weight

An unhealthy gut can cause you to gain weight (or be unable to lose weight) in a couple of ways.

These unhealthy bacteria actually make you fatter by making extra calories from the food you eat!  Unhealthy gut bacteria break down bits of food you would otherwise leave undigested, transforming them into nutrients your body then absorbs.

This can result in you literally absorbing hundreds of calories more than you otherwise would have from every meal.  Naturally, all those extra calories can promote weight gain and hinder weight loss!

Second, an unhealthy gut allows toxins from your food and the bacteria in your gut to get into your body.

Related: Best Probiotic Supplements for Leaky Gut [Based on Research and Reviews]

Apple cider vinegar may be able to help combat both of these weight-promoting effects of an unhealthy gut.

Acetic acid and polyphenol molecules (the molecules that make apples red/pink/green/yellow) both possess antibiotic properties and may be able to help kill off unhealthy bacteria in your gut.

This could help decrease the number of calories you absorb from your food!

Acetic acid has also been shown to help keep your gut from letting dangerous molecules into your body.  It does this by helping keep the cells that line the wall of your intestine healthy.

This can decrease inflammation, letting your metabolism get back to its natural, fat-burning self!

Apple cider vinegar may be able to lower your cholesterol.

Theoretically, higher levels of acetate in your blood could help decrease blood cholesterol levels.  Acetate can activate enzymes that tell the liver to make less cholesterol, which could bring blood levels down.

When tested in animals, this relationship seems to work.  Rat models, for example, have shown that adding vinegar to a high-cholesterol diet can help keep blood cholesterol levels under control.

When tested in people though, this effect hasn’t really panned out.

That being said, there was a trend towards lower cholesterol levels in the vinegar groups.

It’s difficult to say, for sure.  Future studies will have to clear this up for us!

This last claim is the only claim to get a resounding: yes!

Researchers think these effects come from a combination of the ability of vinegar to slow down the rate you digest and absorb food and increase the sensitivity of your cells to insulin!

Should You Add Apple Cider Vinegar to Your Routine?

Who would have thought: all four of those common meme claims are, to one degree or another, supported by scientific evidence!

So, should you add apple cider vinegar to your day?  Is there any reason not to?

Not really!  If you are careful and keep a few things in mind!

On the whole, though, if done with care, both vinegar in general and apple cider vinegar in particular, gets a: yay!

Thinking apple cider vinegar is a good option for you?  Here are some popular brands that you might want to check out!

Apple cider vinegar has had a reputation for thousands of years for being a health food.

Science is now backing up those claims, showing that consuming just a couple of tablespoons of vinegar each day can help regulate your metabolism, control your blood sugar and manage your weight.

Apple cider vinegar (or any other vinegar you like) may be considered a useful supplement to a healthy diet and lifestyle!

Probiotic Bacteria Could Save Your Baby From Deadly Sepsis

The Truth About the Raw Water Craze According to Science

The Truth About Dairy: Is Milk Bad for You?